I recently worked with a client in a declining market. The atmosphere in the company was rather glum. It seemed like most people had decided that there was not much that could be done about the structural forces buffeting the company, and the leaders were reconciled to navigating a genteel decline. Isolated voices called out for greater creativity and more entrepreneurship, but these were voices in the desert – their encouragements and admonitions had limited impact.

There actually were exciting opportunities to pursue, but risk aversion was high. In addition, there was a consensus that the market was against the company and that there was not much that could be done about this. Declining revenue did not constitute a burning platform. Rather, it was explained away. Several leaders had attempted to change this situation, but the effect had been limited.

In situations like this, creative thinking on how to make change happen – and stick – is required. There are many valuable models, theories and books that can support such thinking. Three favorite books of mine are:

These books present rich frameworks together with inspiring examples that can make change easier when it seems really hard.

In this article, I will share a simple framework that can be conveyed in minutes and that can serve as a useful checklist when change seems daunting. It is the change equation. It states that

Where BP is the burning platform, CV is the compelling vision, P is the plan and SFS is a series of successful first steps. 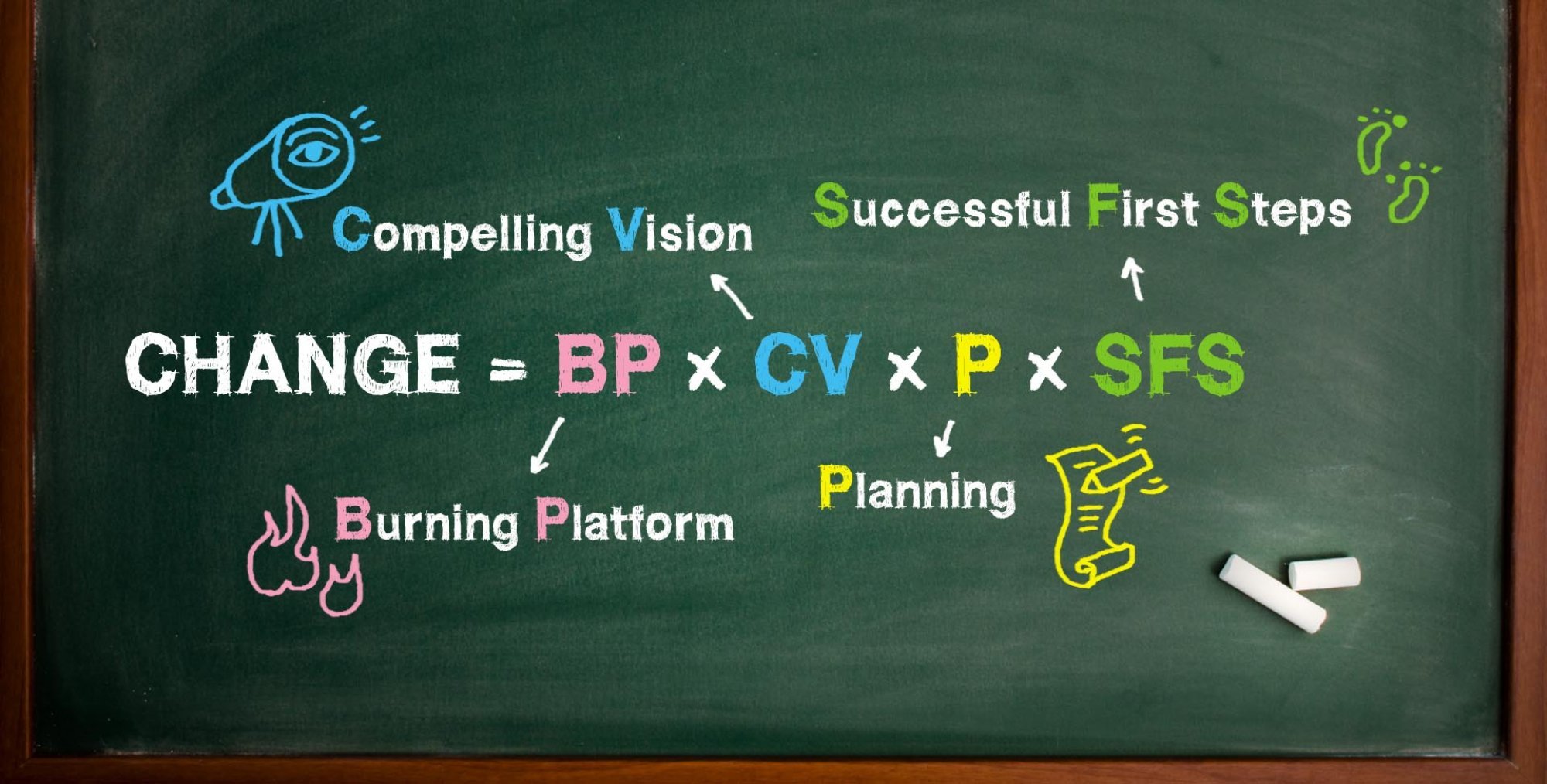 The burning platform is critical. People must have a strong, personal feeling that the status quo is unacceptable. They must have the energy and the conviction to combat lethargy in themselves and in the people they lead. This can sometimes be achieved by modelling what will happen in the “do nothing” scenario. We can add fuel to the fire by encouraging people to confront truths that are often not discussed because they are too uncomfortable.

The compelling vision is also critical. And again, the vision must be understood and embraced by the majority of people involved. Agreement is not sufficient. Ardent desire to see the vision achieved is required. This requires the vision to be specific, realistic (though it can be a stretch) and painted in vibrant colors. It must involve the intellect and the emotions of people. The vision work is not done until people go home and share the vision, enthusiastically, with friends and family.

But a burning platform that is well understood and a compelling vision that is fully embraced are not sufficient. I may grasp both of these but feel daunted by the journey. “It’s all so big and complex. I don’t know that I can scale a mountain that high”. A credible plan is required. Often it does not have to be very detailed at the beginning. But it must be detailed enough to give confidence that we can execute each step and that the steps together add up to the required change journey.

Even if I have a good plan, I may waver. Others might be able to follow such a plan, but do I have the resources, the knowledge, the determination, the strength to follow this plan? Change agents may benefit from engineering small successful steps at the start of the journey and celebrate these successes with much fanfare. When I have successfully taken the first steps and can convince myself that the plan really only calls for more such steps, I strengthen my conviction that this is doable and I bolster my commitment.

I have often seen change achieved with spectacular success when these four factors were in place.

On the other hand, when change seem impossible of when change fails, one of these factors is typically missing or is too weak.

So there you have it – a simple framework that you can use as a checklist and a diagnostics tool. Which factor, among the four, represents the weakest link in the chain in your context? How can you jointly get creative about ways to strengthen this factor? By listening deeply to the people involved in the change and by pooling your capacity for innovation, you will greatly increase our capacity for change.

What are your favorite experiences with bolstering one of these factors?