Skip to content
Previous Next
The exciting inner journey of discovery

The exciting inner journey of discovery

I am a keen kayaker. I have had the joy of paddling kayaks around the world – in the US, in South Africa, in New Zealand, in Norway and in Greenland. My most spectacular kayaking trip was perhaps a weeklong trip among the icebergs along the west coast of Greenland, starting in the town of Ilulissat. The icebergs were sometimes beautiful – in shades from white through baby blue to deep teal. And sometimes they were enormous. The largest one we passed was a roughly hewn cube with sides of approximately two kilometers. We would regularly observe a huge chunk of ice break off from the top of an iceberg, and then see the iceberg, now destabilized, turn majestically around in the water to find a new equilibrium – sending waves out in all directions. 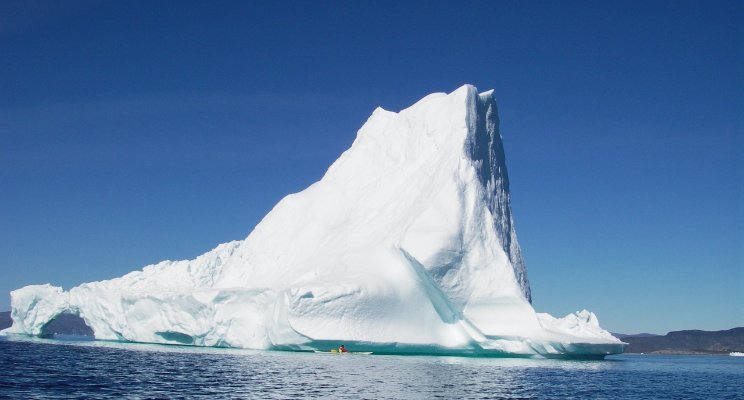 At one point, we paddled quite close to an iceberg when we heard a loud, cracking sound. We expected this sound to be accompanied by something more, but nothing happened. Nothing happened, for a while, that is. After about ten seconds, a mini-iceberg came rushing up from the deep, broke the surface, and lazily turned over on its side. The new iceberg had broken off from the main one, deep under the surface and, being lighter than water, had floated to the surface, where it sent a gush of foam and water in all directions. We figured it was time to get out of there, lest further instability would have more dire consequences for fragile kayakers. 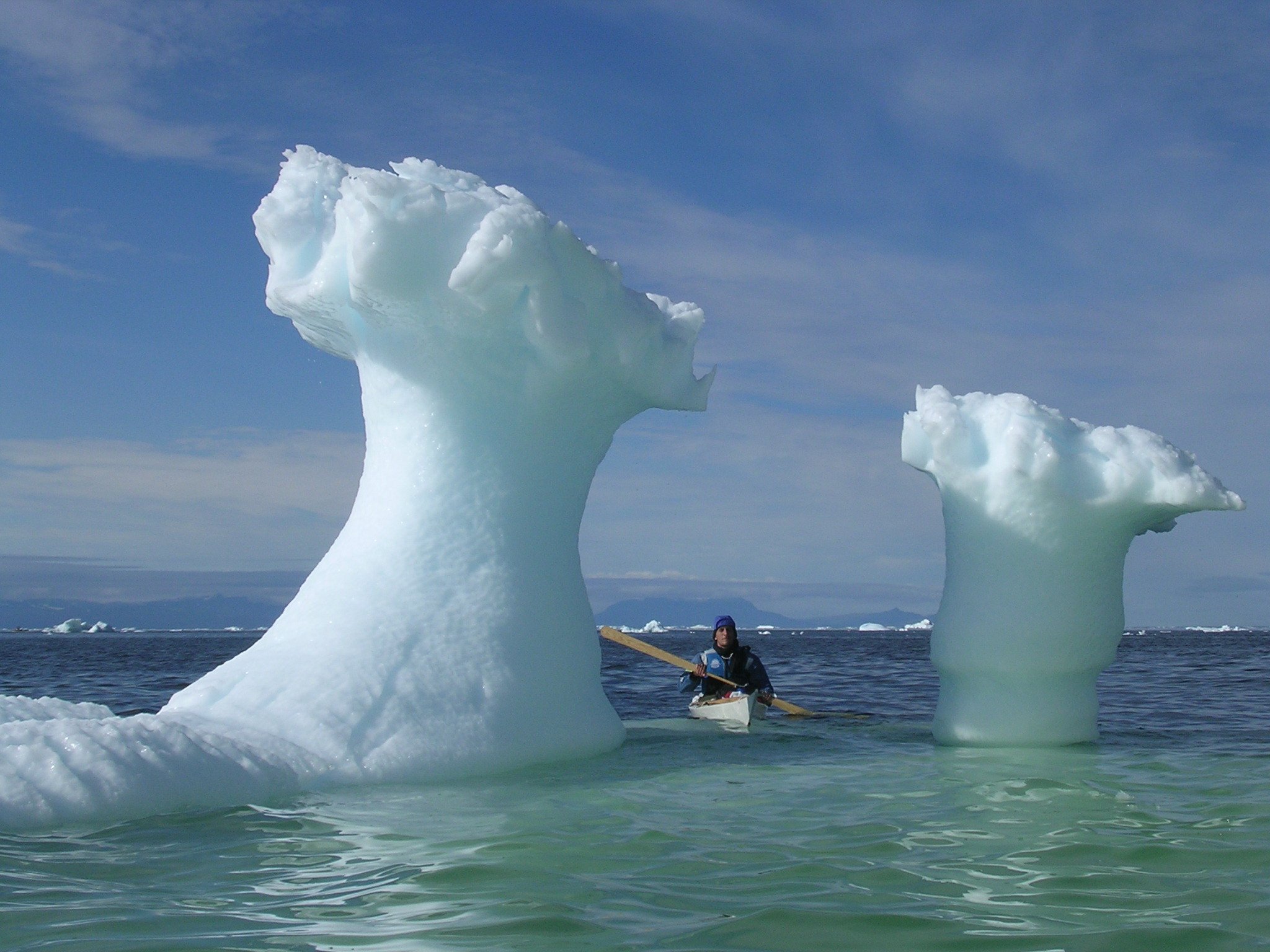 I am grateful for the opportunity to learn about icebergs along the coast of Greenland. Even more exciting, though, has been what I have learned about the iceberg that each one of us represents. We observe the behaviors of people around us, including their speech and their gestures. These behaviors give us some inkling about what goes on beneath the surface, but there is often much more than we perceive. The metaphor of the iceberg is therefore apt. The iceberg reveals around a tenth of itself above the water surface. The test is hidden beneath the surface. In a similar way, people show a small part of what goes one within them, and most of it remains hidden. Through respectful and gentle probing, we can uncover some of it – thereby deepening our understanding and vastly improving communication and collaboration.

My wife and I were raised in different cultures. She was raised in a low-trust culture; I was raised in a high-trust culture. She was taught to nurture harmony; I was taught to ‘speak truth to power’. She was raised with collectivist values; I was raised with a strong emphasis on the value of the individual. Hence, I am regularly baffled by her behavior (and I know I regularly baffle her). But knowing that we have such different backgrounds sometimes makes it easier for us to acknowledge our differences and to remain curious – rather than getting frustrated or angry. Paradoxically, it can actually be easier to communicate with someone from a different culture, as we avoid the illusion that we (fully) know and understand the other. When working with someone from our own environment and culture, it is easier to fall in the trap of writing off a surprising behavior as “stupid” or “immature” without taking the time to explore what drives the behavior. When communicating with my wife, I consciously force myself to retain an open mind and to ask “Why?” when her behavior, her words, her priorities surprise me. Sometimes I use more gentle words, since “why” can be a bit harsh and can easily be interpreted as the start of an inquisition or an accusation. “What leads to you to say this?” can work better. Or, perhaps, “Help me understand what makes you prioritize this way”. And as I practice with my wife, I am getting better at staying curious with other people too – including the ones who are culturally closer to me.

How does this work in practice in the professional world? Let me offer an example. At one time I served a hospital chain that was working to renew its IT infrastructure. This was a critical endeavor, as much of the hardware equipment was so old that it was no longer supported by the vendor. Many software solutions had passed the official “end-of-life” date of the provider. The amount of systems downtime was increasing, thereby jeopardizing the lives of patients. It happened regularly that patients could not be admitted because the admissions system was down. Or surgery could not be performed because the scheduling system that matched patient, surgeon and surgery was unavailable. The situation was becoming dire. In addition to the risk to the life and safety of patients, there was another cost: by skimping on capital expenditure, the hospital had dramatically increased its IT operating expense – it was becoming inordinately expensive to operate their aging IT infrastructure.

While budgets were tight, there was little doubt that some renewal was required. The hospital put together the estimates and the business case for this. I got the job to meet with physicians and build support for this investment. The meeting was memorable. I had scheduled the meeting with two representatives for the medical doctors, but when I came to the meeting room, there were 20 people present. They listened in cold silence as I laid out the case for renewal. Then they voiced their perspective that this was entirely unnecessary. I was struck. I had just laid out the case that the hospital was incurring very high costs, unnecessarily, and that patients lives’ were in danger. And here were these doctors saying that there was no need for change. It would have been easy to dismiss their position as “stupid” (perhaps using a different term). Instead, I probed to understand what was going on. It took more than the one meeting, but by asking “why?”, level by level I got to understand the doctors’ stance. It was actually logical. At least, there was an internal logic to their position. It was this: Any investment in IT may yield real benefits, but these are uncertain (the money can be wasted along the way) and they are likely to only materialize several years in the future. On the other hand, money made available today can be used to buy expensive oncology medicines that will prolong the lives of patients who are in the hospital today. These individuals have names, faces and families – they are real. Weighing up future uncertain benefits against the very real benefits that were available now, the physicians’ choice was clear.

It would have been easy to dismiss the physicians’ initial position. But curiosity about what was beneath the surface together with some patience plus some gentle probing made it possible to create the arena for an intelligent conversation. People are always more open to considering your perspective when they sense that they have been heard and understood.

I am writing this on the plane on my way to my next destination, having just facilitated a leadership development program for a group of 20 senior leaders from a dozen different countries. The program was energizing and inspiring because the participants chose to remain curious – while also being supportive of one another. They were good at probing, gently and respectfully, to understand the aspirations, the hopes and the fears that their fellow participants harbored. This made them effective at challenging and supporting one another. And this, in turn, helped the participants gain a deeper understanding of themselves, of their objectives and of the next steps on their journey. This clarity will make them more inspiring as leaders in years to come. They will be more inspiring because they will be more inspired. And they will be more inspired because they have more courage. And the courage will come from increased clarity. And the clarity comes from curiosity and persistence.

As leaders, we can make a huge difference by remaining aware that there is critical insight lurking “beneath the surface.” This applies to other people – whom we do not fully understand – and it applies to ourselves. For we do not fully understand ourselves: our implicit assumptions, our scars, our hopes, our fears, our needs. If we approach situations of conflict and tension with curiosity, with generosity and with kindness, we can gain rich insight, uncover untold riches, unleash great potential and create tremendous value. Let us help one another in this quest.